Tianjin University (TJU, simplified Chinese: 天津大学; traditional Chinese) is the first modern higher education institution in China, and now a national university under the direct administration of the Ministry of Education of China. It was established in 1895 as Tientsin University/Imperial Tientsin University (Chinese: 天津北洋西學學堂/天津北洋西学学堂) and later Peiyang University (Beiyang University) (Chinese: 北洋大學堂/北洋大学堂). In 1951, after restructuring, it was renamed Tianjin University, and became one of the largest multidisciplinary engineering universities in China. The university was one of the first 16 universities accredited by the nation in 1959. It is also among the first group of institutions of higher learning in the national “211-Project” to which priority is given in construction. In order to carry out the “21st Century Education Revitalizing Action Plan”, in late 2000 the Ministry of Education and Tianjin Municipality signed an agreement which aims to build Tianjin University into a 1st-class university in the world in the 21st century. 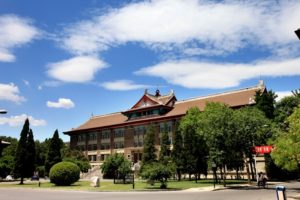