For over a century, Beijing Normal University has from the beginning shared a fate as regards the Chinese people’s struggle to gain independence, freedom, democracy and prosperity, and the university has played a significant role in patriotic movements that have included the May 4th Movement (1919) and the December 9th Movement (1935). Over the years, the school has been home to a large group of renowned intellectuals and scholars, who have promoted culture and stimulated education, to name a few: Li Dazhao, Lu Xun, Liang Qichao, Qian Xuantong, Wu Chengshi, Li Jinxi, Chen Yuan, Fan Wenlan, Hou Wailu, Bai Shouyi, Zhong Jingwen, Qi Gong, Hu Xiansu, Wang Kunren and Zhou Tingru. Adhering to a fine tradition of “Patriotism, Progress, Honesty, Sincerity, Truth-Seeking, Innovation and being a paragon of virtue and learning” while embodying the spirit of “Learn, so as to instruct others and Act, to serve as example to all,” for over a hundred years Beijing Normal University has lived by the philosophy of “Pursuing knowledge, Cultivating personality, and Helping the whole world.”

Among the national key universities built during the time of China’s Seventh and Eighth Five-Year Plans, Beijing Normal University is acknowledged as one of the nation’s first ten key universities. The school entered into the first “211 Project” Construction Program during the time of the Ninth Five-Year Plan. On the occasion of the 2002 Centennial Celebration, the Ministry of Education and Beijing Municipality said they attached great importance to collaboration in the development of Beijing Normal University. The Ninth Congress of the Communist Party of China in Beijing listed Beijing Normal University as among the institutions it was supporting to become world-class universities. Over the Tenth Five-Year Plan period, the university was listed on the nation’s “985 Project” Construction program.

The main campus (North Taipingzhuang Campus) of Beijing Normal University covers 172.64 acres that serve as an important place for the university to carry out educational activities. The school has 22,000 full-time students, including 8,900 undergraduates, 11,300 graduates and 1,800 long-term international students. The campus has 1 education faculty, 22 schools and colleges, 2 departments and 36 research institutes (centers). The library boasts over 4.1 million volumes and some 17,300 GB of digital resources, with 1,400 GB e-books. 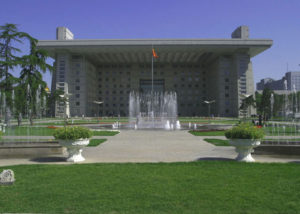 Beijing Normal University has a reasonably structured high-quality faculty team. At present, there are 3,100 teachers and staff on the main campus of whom 2,000 are full-time instructors. The number of BNU teachers with senior titles, doctoral degrees and/or overseas learning/working experience puts the school at the forefront among Chinese universities. There are 8 academicians from the Academy of Sciences and the Academy of Engineering, 12 academicians employed simultaneously by the two academies, 2 emeritus professors, 5 senior professors, 19 Cheung Kong scholar chair professors, 3 chair professors, 34 chief experts for the Marxism Theoretical Research and Development Project, 32 winners of the China National Foundation awards for distinguished young scientists, 20 candidates for the Outstanding Talents Projects, 1 member of the Academic Degree Commission of the State Council (ADCSC), 16 members of the Discipline Appraisal Team from the ADCSC, 154 winners of Inter-millennium and New Century Talents awards supported by the Ministry of Education, 7 winners of the National Famous Teachers awards, 4 National Innovation Research Groups and 3 Subject Innovation and Talent Introduction groups for higher education institutions launched by the Ministry of Education and the State Administration of Foreign Experts Affairs, P.R. China.

Beijing Normal University promotes broad international cooperation and exchange, having signed cooperative agreements with nearly three hundred universities and research institutes from more than thirty nations and regions and exchanging students through cooperative programs with over fifty universities from places that include the United States, the UK, Japan, South Korea and Canada. Moreover, BNU has co-established 7 Confucius Institutes, with: the University of Manchester (UK), San Francisco State University (US), the University of Oklahoma (US), Dawson University (Canada), Sherbrooke University (Canada), Aalborg University, Denmark, University of Macerata, (Italy) and the College of William and Mary (US). Long-term and short-term international students from over 94 countries and regions are studying at BNU, with 1,800 autumn-registered long-term international students, of whom 76% are pursuing academic degrees.

The 12th Party Congress of Beijing Normal University set out the development objective to build BNU into a world-class university by the middle of the century. BNU vows to – during the implementation of the Eleventh Five-Year Plan of China – adhere to the work principle of “human-oriented reform and innovation, optimizing structure, giving prominence to special features and enhancing quality,” holding fast to a strategy of enhancing education quality and following a development philosophy that emphasizes connotation, innovation and specializing and that is open to building the school into a world renowned university, and with a series of key projects that includes: Developing BNU by Ensuring a Quality Project and Strengthening BNU with a Talents Project, a Discipline Development Project, an Internationalization Project, an Institutional Innovation Project, a Condition Insurance Project and a CPC Construction Innovation Project.