Sichuan University is located in Chengdu, a famous historical and cultural capital city of Sichuan Province, known as “the land of abundance”. It consists of three campuses:Wangjiang, Huaxi and Jiang’an, covering an area of 470 hectares and boasting 2.515 million square meters of floor space. The university campuses, with their favorable environment and beautiful landscape, make a wonderful place for learning and research.
Sichuan University is an institution that comprises three former national universities: the former Sichuan University, the former Chengdu University of Science and Technology, and the former West China University of Medical Sciences. The history of Sichuan University dates back to the Sichuan Chinese and Western School founded by Lu Chuanlin, Governor of Sichuan in 1896 on the orders of Emperor Guangxu. It is the earliest modern institute of higher education in Southwest China. The former Chengdu University of Science and Technology was one of the earliest multi-disciplinary engineering universities established through a restructuring program of colleges and universities. The former West China University of Medical Sciences, original West China Union University, was established by western Christian missionaries in Chengdu in 1910. It was not only one of the first universities in the western tradition, but also one of the pioneering universities to offer postgraduate programs in China.

In 1994, the former Sichuan University and the former Chengdu University of Science and Technology merged into Sichuan United University, and then in 1998, it was renamed Sichuan University. CPC and state leaders including Jiang Zemin and Li Peng wrote congratulatory messages and gave their best wishes to the merger of the two universities. The second merger took place in 2000 when Sichuan University and the former West China University of Medical Sciences joined together. “Sichuan University is a pioneer in the institutional reform of higher education. It’s one of the first universities being reformed and has made historic contributions to the reforms of higher education in China,” commented Li Lanqing, a former Vice Premier. During the May 12th Wenchuan earthquake relief period, CPC and state leaders including Wu Bangguo and Wen Jiabao visited Sichuan University.
Sichuan University enjoys a long tradition in education and boasts many renowned scholars. Over the past century, the university has attracted masters such as historian Gu Jiegang, writer Li Jieren, esthetician Zhu Guangqian, physicist Wu Dayou, botanist Fang Wenpei, public health expert C. C. CHEN, and mathematician Ke Zhao. The administrators of the university include some of the most important names in contemporary China, Wu Yuzhang and Zhang Lan, for example. Among the outstanding alumni are Zhu De, one of the founding fathers of the People’s Republic of China, Yang Shangkun, a former Chairman of China, GuoMoruo and Ba Jin, both renowned writers, as well as national hero Jiang Zhujun. Over 50 members of the Chinese Academy of Sciences and Chinese Academy of Engineering graduated from Sichuan University, and 36 out of 50“Sichuan Cultural Celebrities”, nominated in 2001, were also alumni of the university.
Sichuan University has a comprehensive range of disciplines covering 12 categories: humanities, science, engineering, medicine, economy, management, law, history, philosophy, agriculture, education and art. It consists of 34 colleges, including a postgraduate college and an overseas education college. A total of 45 disciplines have been authorized by the state to grant doctoral degrees. Altogether, the university offers 354 doctoral programs, 438 master programs, 32 professional master’s programs, 138 undergraduate programs, and 37 post-doctoral research stations. It also has 46 national key disciplines and 4 national key cultivated disciplines. 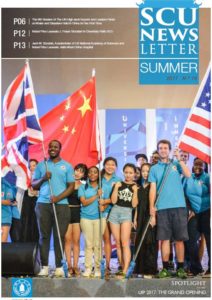